Driving home from practice tonight, 3/5 of the Communiqué boys found a hurt cat in the middle of a mildly busy Oakland street. It had been hit by a car, but was still alive and breathing, so we wrapped it up in a pillowcase and took it to the vet, knowing quite well that the City of Oakland couldn't do anything to help us. I'd like to keep this cat alive if I could. Miss Rodeo America tells it best:

late this evening i was curled up with a glass of wine and a book when cory called saying that, on the way back from band practice, they'd found a cat who'd been hit by a car.

he and a bandmate picked me up on the way to the emergency vet, with a small, battered cat wrapped in a red towel on his lap. the cat was struggling intermittently and was breathing with difficulty, but was still alive.

i'll condense a couple of hours of fretting and worrying in the vet office here by saying that we (cory, myself, the vet tech, and the vet) faced a hard decision. even if we could afford the several hundred dollars she'd need to repair her broken jaw (to start with - we don't even know the extent of her injuries), we'd still have a sick cat on our hands. there's no way we could adopt her and, honestly, it's kitten season and the world is knee-deep in healthy cats who need homes.

did she have a home? were we considering killing a family pet? would she make it? what about the two little kittens at the vet who were looking for homes - were we taking good homes from them? was there a chance she just needed a couple of stitches, or was she near death? we just didn't know. we were crying at midnight in a strange waiting room deciding the fate of an innocent creature.

it was gut-wrenching, but we came to a conclusion, and i ended up authorizing the euthanasia.

as the situation stands right now, we're going to give them all the money we can spare towards her care and keep, and, if they find they have to put her down, towards the care of the next animal who comes in wrapped in a towel and bleeding. i know times are hard, but if you've got a dollar or two to spare for an animal that's injured and scared, please do what you can.

she's tortoiseshell, and apparently she's breathing on her own right now, and calm.

(thanks to all who donated, it really helped the kitty.)

Just sitting around in my brother's Los Angeles pad, listening to CDs and waiting for him to get off work. The band took off and are already headed home, it feels slightly odd that I'm still here, but I'll be home later tonight.

The show last night went rather well, the club was very nice and the stage sound was pleasantly quiet. None of us played our best, but we felt good about things overall. I saw a lot of people from my college days who had since come to Southern California in search of jobs and love and whatnot. It was good to see all of them again, sometimes old friends are the best kind.

Nothing planned for today except maybe a little shoe shopping and a decent dinner before I hop on a plane back to Oakland. 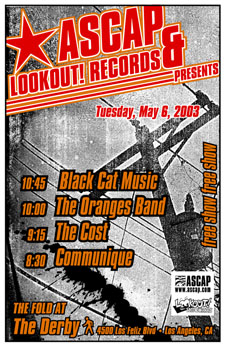 I'm off to L.A. tomorrow. Come down to the free show ya'lls.